Congratulations to the USA Women's National Team, which won the 2019 FIFA Women's World Cup earlier this month by beating the Netherlands 2 - 0.  The US women have long dominated international soccer and this win marks the team's fourth World Cup victory out of just eight editions since the women's competition began in 1991 (the men's World Cup began in 1930).

But the 2019 World Cup also offered many signs that the rest of the world, especially Europe, is catching up with the US in women's soccer. Seven of the eight quarterfinalists were from Europe and the US won its 3 games leading up to the final with narrow 2 -1 victories over Spain, France and England. Women's professional soccer is accelerating quickly in quality and popularity across Europe.

The Dutch, in addition to their own rich soccer history, of course also lay claim to the world's oldest stock market, begun in 1602 to trade shares of the Dutch East India Company. As on the field, though, the US keeps mounting victories in terms of stock market performance, too, against the rest of the world (Below is a snapshot a typical 60/40 portfolio allocation, along with trailing returns for the relevant index in each asset class): 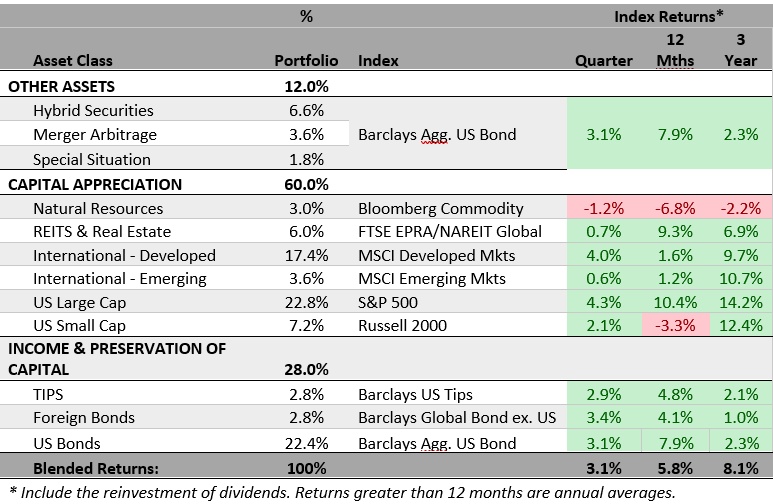 Although five of the six capital appreciation segments we highlight in the table above were up in the quarter, US large company stocks led the way, as they have for nearly a decade now. The S&P 500 index was up 4.3% in the second quarter and a remarkable 18.5% for the first half of 2019. Driving the performance were some of the usual suspects of large technology companies: Microsoft, Amazon, Apple and Facebook were all up more than 25% in the first half of 2019.

Over the long-term, we are firm believers that a company's value will grow if its earnings power grows. The same goes for indices and markets as a whole. But as further proof that there is not necessarily any short-term correlation between earnings and price appreciation, look no further than the last couple of years. In 2018, the S&P 500 companies in aggregate reported nearly 20% growth in earnings (largely fueled by the large drop in corporate tax rates), while the S&P 500 declined in price more than 4%. Fast forward to 2019 and earnings for S&P 500 companies have been little more than flat (see the notes on the global economy below) while stock prices have rocketed up.

While the increase in the S&P 500 was enough to take it into record territory, most of the other capital appreciation segments are still making up for fourth quarter losses and remain down or flattish compared to levels 12 months ago.

We are left to wonder which is more likely, whether the non-US stock markets might catch up and surpass the US stock market returns between now and the next Women’s World Cup in 2023, or whether someone other than the US will be able to win that 2023 tournament.

Just as significant as the healthy stock markets so far this year, 2019 witnessed very strong returns for bond markets too. First, the good news: interest rates, which crept upwards from 2016 to 2018, dropped sharply in the first half of 2019 (see the chart below). You'll note from the table above that the Barclays Aggregate Bond Index was up 3.1% in the quarter (and 7.9% over the last 12 months!). The 10-year US Treasury Note yield dropped to 2% at quarter-end.

Now for the bad news: this drop in rates is widely seen as a symptom of a weaker economic outlook.

To quote from Fed Chairman Jerome Powell's recent Semiannual Monetary Policy Report to the Congress: "Our baseline outlook is for economic growth to remain solid, labor markets to stay strong, and inflation to move back up over time to the Committee's 2 percent objective. However, uncertainties about the outlook have increased in recent months. In particular, economic momentum appears to have slowed in some major foreign economies, and that weakness could affect the U.S. economy. Moreover, a number of government policy issues have yet to be resolved, including trade developments, the federal debt ceiling, and Brexit."

As a result, markets are now betting the Fed is likely to lower short-term rates this year. 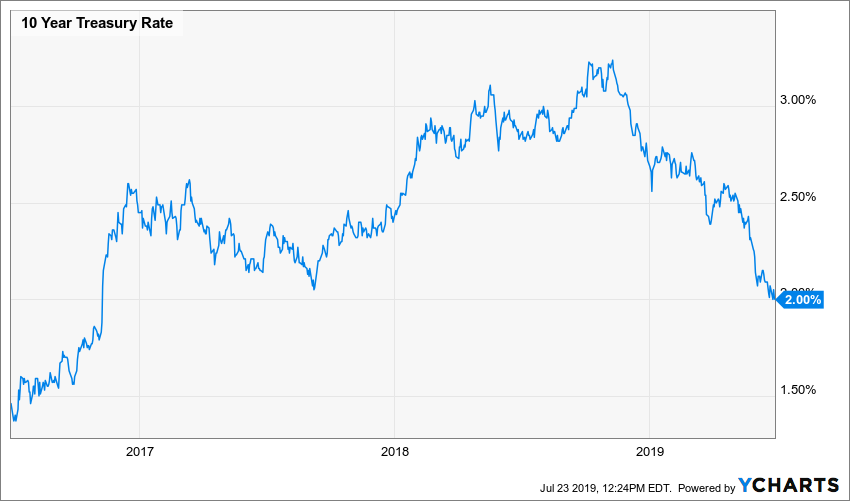 (Not all clients of Bristlecone are invested in our Large Cap Value Equity portfolio strategy, depending on the size of the overall portfolio, and the client's objectives and constraints.)

After the deduction of our management fee, the median Bristlecone Large Cap Value portfolio performed in line with the S&P 500 and for the quarter and year-to-date and was slightly ahead of the value benchmarks.

During the quarter, we sold one position entirely: power producer Vistra Energy. We originally bought shares in Dynegy, which was later acquired by Vistra. Power prices have never really recovered from a drop more than 10 years ago, and this was a disappointing investment.

We also trimmed our position in Cisco Systems. With large tech companies increasingly dominating our lives, the news headlines and the stock markets, a look back at Cisco's stock price provides an interesting lesson in the difference between price and value. Cisco was one of the darlings of the late 1990s tech boom and the stock price climbed from under $6 in 1997 to over $70 in early 2000. The price was so high compared to the fundamentals that there was almost no value in the stock. 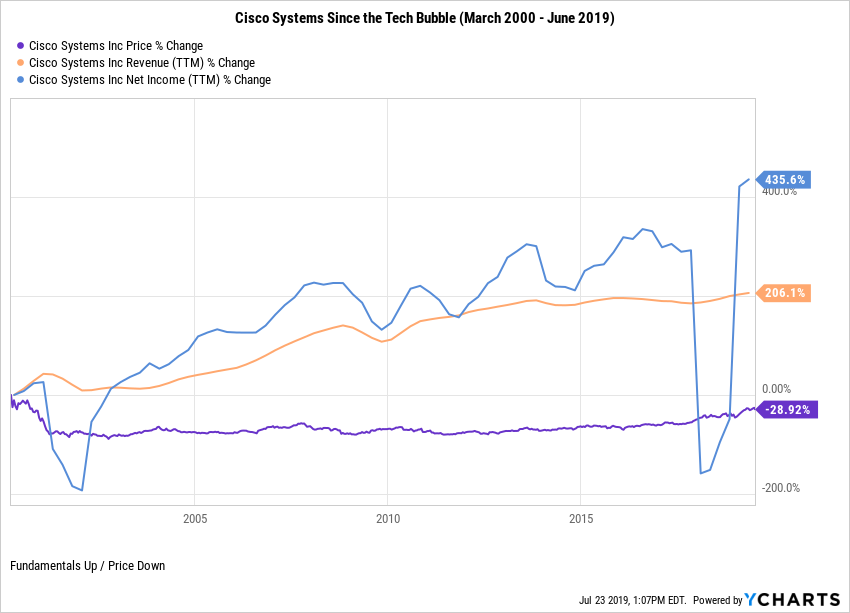 Since then, in term of sales (up more than three-fold) or earnings (up more than five-fold) or nearly any other meaningful measure, Cisco has been an amazingly productive company. Other than running into the law of large numbers and seeing its growth slow, it's been a solidly successful company. Yet nearly two decades of fundamental growth later, the stock price remains below that crazy 2000 peak.

Bristlecone acquired its shares of Cisco between 2008 - 2011, at a price around $18, long after the tech boom and bust and once value was restored. The gap between Cisco's price and value has narrowed since our purchase (in the good way, with the price going up) and we felt it was a good time and price to reduce the size of our investment.

We added one new position during the quarter, pharmaceutical developer and agricultural products manufacturer Bayer. Bayer makes everything from aspirin to cancer drugs to corn seeds to--unfortunately--weed killers. When Bayer acquired Monsanto in 2018, it also mired itself in a litigation swamp related to that company's RoundUp product, which has been the target of a wave of product liability suits in the United States.

The active chemical in RoundUp, glyphosate, has continually been approved for its intended use and deemed non-carcinogenic by the US Environmental Protection Agency and many other world regulatory bodies. Nonetheless, there is some evidence potentially linking glyphosate exposure to cancer and that has led Bayer to lose its first three court cases, resulting in huge headline numbers for punitive damages.

We don't claim to have enough scientific or legal knowledge of this matter to accurately estimate the eventual cost to Bayer. We are reasonably confident, though, that Bayer has the financial strength to weather this storm and that, when the cases are resolved, Bayer will trade at a higher valuation than it does today. We are sure we'll see negative headlines for Bayer in the meantime.

Thank you again for your trust in Bristlecone and please reach out to us if you have questions or want to discuss your portfolio. Have a great summer.

Ready for a Better Way to Investing?

At Bristlecone Value Partners our investment decisions are driven by independent thinking and a solid foundation of research. We think of our clients as investment partners and are firm believers in eating our own cooking.

One of Bristlecone Value Partners’ principles is to communicate frequently, openly and honestly. We believe that our clients benefit from understanding our investment philosophy and process. Our views and opinions regarding investment prospects are "forward looking statements," which may or may not be accurate over the long term. While we believe we have a reasonable basis for our appraisals, and we have confidence in our opinions, actual results may differ materially from those we anticipate. Information provided in this blog should not be considered as a recommendation to purchase or sell any particular security. You can identify forward looking statements by words like "believe," "expect," "anticipate," or similar expressions when discussing particular portfolio holdings. We cannot assure future results and achievements. You should not place undue reliance on forward looking statements, which speak only as of the date of the blog entry. We disclaim any obligation to update or alter any forward-looking statements, whether as a result of new information, future events, or otherwise. Our comments are intended to reflect trading activity in a mature, unrestricted portfolio and might not be representative of actual activity in all portfolios. Portfolio holdings are subject to change without notice. Current and future performance may be lower or higher than the performance quoted in this blog.

References to indexes and benchmarks are hypothetical illustrations of aggregate returns and do not reflect the performance of any actual investment. Investors cannot invest in an index and returns do not reflect the deduction of advisory fees or other trading expenses. There can be no assurance that current investments will be profitable. Actual realized returns will depend on, among other factors, the value of assets and market conditions at the time of disposition, any related transaction costs, and the timing of the purchase.