Domestic stocks rebounded in the second quarter–led by small cap, energy, and technology shares—but the broader S&P 500 index still ended the quarter below its January peak (up less than 3% for the year).  Investor sentiment during the first half was mixed. Initially, optimism abounded that the stimulative impact of last December’s tax cuts, combined with the longest monthly job expansion on record, would push stocks higher.  Subsequently, rising geopolitical tensions and escalating trade disputes have clouded the picture, and increased the potential for negative unintended consequences.

Below is a snapshot a typical 60/40 portfolio allocation, along with trailing returns for the relevant benchmark in each asset class: 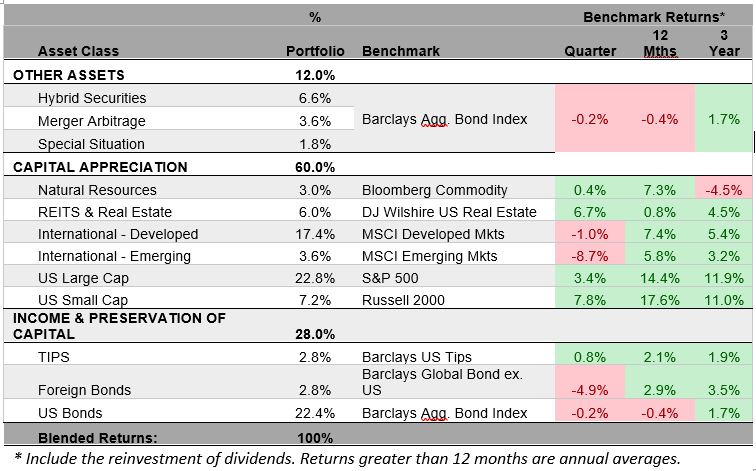 Of course, the stock market’s job is to parse all this uncertainty.  Thus far, investors have favored the sectors benefiting the most from tax cuts, while avoiding the sectors most vulnerable to a trade war. Smaller U.S. companies fit the bill on both counts.  These firms generally derive a higher proportion of their sales from within the U.S. (less vulnerable to tariffs on imports/exports).  Moreover, the heavy mix of domestic sales likely means that these firms previously paid an effective corporate tax rate very close to 35% (and consequently, stand to reap the greatest windfall from a drop in the statutory rate to 21%).

Other recent winners include large cap technology companies.  The Nasdaq composite index rose 6.6% in Q2 and 9.3% through the first half.  In fact, just a handful of large technology stocks accounted for most the S&P 500’s appreciation this year.  Many of these companies are flush with cash held in overseas subsidiaries, which accumulated over many years and was “repatriated” at very low tax rates as part of last year’s tax legislation.  Now that they have unrestricted access to the cash, companies are plowing it back into stock repurchases.  Apple repatriated about $250 billion as part of the tax bill, and announced in May that $100 billion of that (roughly 1/8th of the company’s market cap at the time) would be earmarked for share repurchases.

While Apple is an outlier in terms of the absolute size of its stock repurchases, it is very much in line with the trend of U.S. corporations redeploying tax cut windfalls into buybacks.  For perspective, U.S. companies announced $436 billion of stock repurchases in Q2.  Not only was this a new record, it was nearly double the previous record, which had just been set in Q1 of this year!

In another sign of the times, Berkshire Hathaway just announced a revision to their stock repurchase policy.  For most of Berkshire’s history, CEO Warren Buffett eschewed stock repurchases, favoring more lucrative uses of capital.  Within the last decade, Buffett somewhat reluctantly came around to the idea of buybacks—provided that the stock trades at a material discount to his estimate of its intrinsic value.  For practical purposes, Buffett settled upon a policy authorizing repurchases whenever the stock dropped below a multiple of book value (initially 110%, later amended to 120%).  Going forward, he has removed that ceiling, and will permit repurchases whenever he and vice-chairman Charlie Munger agree that Berkshire stock is trading below its intrinsic value, “conservatively estimated.”  Though not explicit, this is widely interpreted as a liberalization of Berkshire’s buyback policy, a likely nod to the large cash surplus accumulating on the company’s balance sheet (about $108 billion as of March 31st), and probably an indication that Buffett sees fewer attractive uses of capital at the moment.

Two sectors left out in the cold this year are consumer staples and financials.  With the former, some of the causes are secular (online and generic competition has chipped away at the value of brands for some time now). However, a strong economy also drives up the cost of raw materials (exacerbated in some cases by protective tariffs).  Meanwhile, relatively full employment inevitably leads to labor shortages in certain industries (ex: truckers), driving up labor (and freight) costs.  Finally, rising U.S. interest rates contribute to a strengthening dollar—a headwind for U.S.-based exporters. All these factors combine to pressure profit margins for consumer staples companies, explaining why their stocks have fallen out of favor.

Looking at financials, things appear to be going well on the surface.  Of the 35 large banks subjected to the Fed’s “stress test” this year, all of them passed. Credit losses remain below normalized levels, and most banks saw a large increase in quarterly earnings due to the tax cut.  Furthermore, a renewed climate of financial deregulation (rollback of Dodd-Frank) and rising short-term interest rates are both net positives, from the perspective of most banks.  However, one countervailing cause for concern is the flattening yield curve: 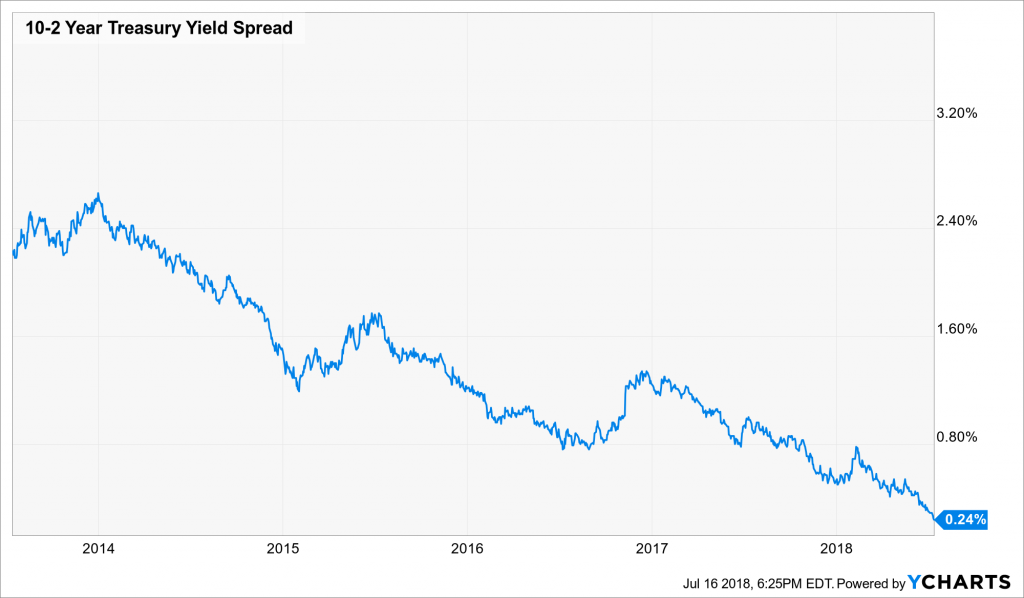 The spread between short and long-term rates continues to compress and is flirting with “inversion” (a scenario where short-term rates exceed long-term rates).  Historically, an inverted yield curve is correlated with the onset of recessions, since it reduces the incentive for banks to lend, restraining credit growth.  One mitigating factor this time around is that a long period of quantitative easing may have artificially held down interest rates on the long end of the curve, making it appear flatter than it otherwise would be.

Another hallmark of a strong economy is inflationary pressure.  In June, the Consumer Price Index (CPI) registered its largest annual gain in over 6 years, rising 2.9%.  Much of this was due to rising oil prices, which spiked 14% during Q2 (excluding food and energy, CPI registered only a 2.3% increase).  Resurgent inflation gives the Federal Reserve a freer hand to continue “normalizing” short-term interest rates.  The Fed already raised rates twice this year (in increments of 0.25%) and most expect two more increases before year-end.  Not surprisingly, higher inflation aided TIPS, which have outperformed nominal bonds in Q2 and over the past twelve months.

Large Cap Value Portfolio
(Not all clients of Bristlecone are invested in our Large Cap Value Equity portfolio strategy, depending on the size of the overall portfolio, and the client’s objectives and constraints)

During the quarter, the Large Cap Value (LCV) portfolio’s performance was essentially flat, lagging the 3.4% return of the S&P 500.  This is a familiar yet frustrating trend, mainly because, as noted earlier, the S&P 500’s returns are increasingly driven by a small group of large “growth” stocks.  Through June 30th, the trailing 5-year return of the S&P 500 index exceeded that of the S&P 500 Citigroup Value index by about 3% annually.

There are still pockets of value among Large Cap U.S. equities, but finding them increasingly requires a willingness to drift off the beaten path.  Lately, we’ve found better opportunities among spinoffs, stocks with low institutional sponsorship or public float, and companies whose free cash flow potential is temporarily obscured by accounting conventions.  The result is an LCV portfolio which looks quite different from the S&P 500, but which we think is better prepared to weather the inevitable next storm, whenever it comes.

During the quarter, we took advantage of further price weakness to continue building a position in GCI Liberty (GLIBA), a spinoff which we originally began buying in Q1, and discussed in that quarter’s commentary.  We added to this position in April and May, and by the end of the Q2 it was one of the top 5 positions in the portfolio, by weight.

Also in May, we sold a small position in DXC Technology (DXC), which we had acquired as a spinoff from Hewlett-Packard Enterprises (HPE) in early 2017.  In the year or so following the spinoff, this stock had appreciated beyond our estimate of intrinsic value, so we elected to redeploy the capital toward a new position, Hanesbrands (HBI).

HBI is among the category of consumer staples stocks which we earlier noted have fallen out of favor.  It is a boring, mass market business (activewear and innerwear apparel) in which economies of scale and steady, incremental operational improvements are the keys to success.  HBI was itself a spinoff from Sara Lee in 2006 and has steadily grown since then via a series of acquisitions.  The company has also expanded gross margins in 10 of its 11 years as an independent company, though lately this operational improvement has been obscured by one-time costs related to acquisition accounting and the 2017 tax reform law.  A particularly abrupt selloff this spring allowed us to initiate a position in HBI at what we estimate is about 10x the company’s free cash flow for this year.

In June, we trimmed our position in Weyerhauser (WY), a long-term holding which we originally acquired during the 2008-2009 housing crisis and great recession.  At the time, demand for lumber had plummeted along with new home construction, compounding the struggles of WY’s low-margin paper products division.  In the decade since then, the company shed their non-timber businesses and converted into a REIT structure, providing more clarity to investors.  With the stock now closely approximating our estimate of fundamental value (implying a narrower margin of safety) we elected to reduce the weighting of this position in the portfolio.

Finally, we had a brief window of time in late June to increase our weight in another long-term holding, Nestle (NSRGY).  We originally bought this stock during the financial crisis, a classic case of “the baby being thrown out with the bathwater” as investors scurried for the exits in October 2008.  Nestle rebounded swiftly thereafter, generating steady returns roughly in line with the broader market (though with lower-than-average price volatility, which unfortunately limited our opportunities to buy more).  Nestle is currently overhauling their brand portfolio to better reflect changing consumer tastes, which has crimped revenue growth in the short-term and caused the stock price to lag.  However, we think the long-term competitive advantages of this business are intact, and welcomed the chance to finally make it a more meaningful weight in the portfolio.

All told, our trades during the first half of the year have reduced the excess cash in the LCV portfolio by more than half, while expanding the weighted average discount by nearly 20%.  We are optimistic that these investments will sow the seeds of future outperformance.

As always, we welcome your questions and feedback, and appreciate your confidence in our services.