In recent years, one issue that has vexed economists is the rather sluggish pace of U.S. Real GDP growth (less than 1.5% per year over the past decade).  What makes this data point especially confounding is that it overlaps a period where several other macroeconomic indicators are trending strongly in a positive direction.  The unemployment rate, after peaking at nearly 10% in the aftermath of the Great Recession, has declined to only 4.4%.  Stocks have also done well, with the S&P 500 index nearly quadrupling from its recession-era low.  Finally, corporate profits (measured as a percentage of GDP) have spent most of the last decade at elevated levels not seen since the post-WWII economic expansion: 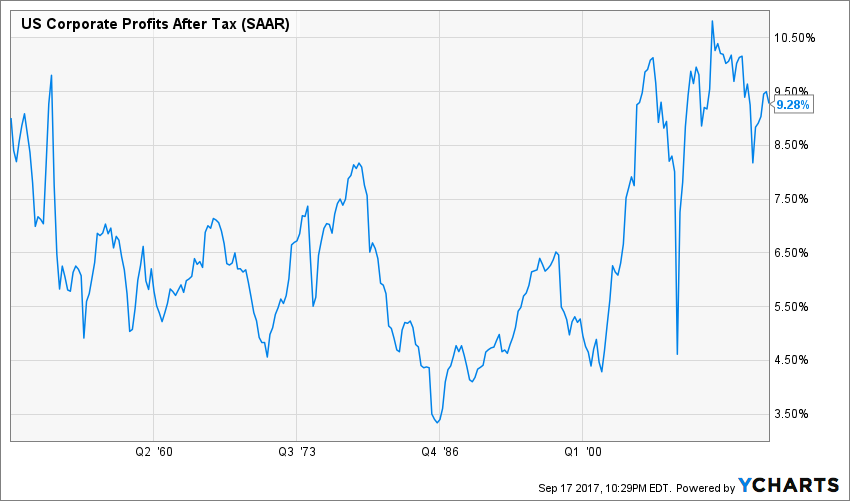 What is the missing link then, which explains how full employment, record corporate profits, and a surging stock market can co-exist with anemic GDP growth?  As always, there are a number of theories.  Most pundits focus on lagging productivity (economic output per hour worked) as a root cause.  This makes some intuitive sense, since the two main drivers of GDP growth are: 1) growth in the labor force, and 2) growth in productivity.  As the example of Japan shows, changes in demographics are an important determinant of economic growth, and the prime working age population (25 to 54 years old) has been flat for almost 10 years (source: CalculatedRISK).

Another possibility is that lackluster GDP growth may simply be the result of “measurement error.”  According to this theory, the traditional method of calculating a country’s economic output no longer holds water in an era of global supply chains and offshore tax havens. To understand why, consider the supply chain for an iPhone: Apple designs the product in the Unites States, and manufactures it mostly in China from components sourced throughout Asia.  Meanwhile, the “profit” from the sale of the phone rests not in the U.S., but with an Irish subsidiary to which Apple has assigned much of its related intellectual property, in order to capitalize on the low corporate tax rate in that jurisdiction.  Multinational companies with significant intangible assets such as patents or copyrights (many in the technology and healthcare sectors) routinely set up holding company subsidiaries for their intellectual property in low-tax countries, and this obviously distorts calculations of economic output such as GDP.

A more recent theory is that corporate consolidation over the past decade has concentrated “market power,” reducing competitive pressure and contributing to an environment of quasi-monopoly in many industries.  These quasi-monopolies are characterized by restricted output, higher prices for consumers, and stagnating wages for labor.  The Economist had a deep dive article on this topic last year, and a recently published study by two economists also made the case that concentrated market power is undermining the dynamism of the U.S. economy—limiting GDP growth and labor force participation, while also increasing economic inequality.

Equifax Hack
A bit over a week ago, one of the nation’s three major credit reporting agencies (Equifax) announced that it had been the victim of a cybersecurity breach which began in May, and was not discovered until late July.  During this time, sensitive personal information—including social security numbers, birth dates, and addresses—from an estimated 143 million customers was compromised.  In response, Equifax set up a website with a cross-reference tool for people to learn whether their own personal information may have been compromised as part of the hack.  Either way, Equifax is offering a free one year subscription to their credit monitoring service (called TrustedID Premier) to anyone who requests it.

While there is no real downside to taking Equifax up on this offer, neither should consumers be lulled into a false sense of security by a “credit monitoring” service—the reality is that most of the measures employed by this service (and others like it) are passive/reactive and designed mainly to limit the potential fallout from identity theft, not prevent it.  Therefore, a consumer who is justly aggrieved by an unprecedented cybersecurity breach at a company whose sole function is to gather and safeguard data, may wish to take further proactive measures to limit the chance of identity theft.  Two such options (which you can learn more about on the website for the Consumer Financial Protection Bureau), are a “credit freeze” and a “fraud alert.”  Unfortunately, both of these measures involve some measure of cost and/or inconvenience, in order to more actively safeguard against identity theft.

Another great resource for educating yourself about identity theft is the website dedicated to the topic run by the Federal Trade Commission.  Finally, customers of Discover are also eligible for a free credit monitoring service from that firm, which not only offers alerts for any new accounts created on your (Experian) credit file, but also actively scours the “dark web” for evidence of your social security number being sold to illicit actors.  Eligible cardholders can enroll in the free service here.

We also like to take this opportunity to remind you to never include social security, account numbers, statements, and other sensitive information in your emails addressed to Bristlecone, other financial institution or trusted advisor (CPAs, attorneys, etc.). Such communications are not secure, and we’ll never ask you to provide us your personal financial information through email. When in doubt, please make sure to call us.