After a 4th quarter correction which bottomed out on Christmas Eve, U.S. equity markets have rallied for 8 consecutive weeks (through mid-February), with the S&P 500 index up 18% over that span (and 11% year-to-date).  Small cap stocks rebounded even more swiftly, with the Russell 2000 index up nearly 24% from its December low (16% year-to-date).  Investors shrugged off some negative macroeconomic news (December retail sales declined 1.2%, the largest drop since September 2009), seemingly giving more weight to a host of other positive developments.

First, on January 25th an agreement between Congress and the White House ended the longest government shutdown in U.S. history, and on February 15th President Trump signed a spending bill which fully funds all federal agencies for the rest of the year, removing what had been a large overhang of uncertainty.  Second, the Federal Reserve’s January meeting brought no incremental change to the target Fed Funds rate.  More importantly, the Fed’s language from the meeting indicated a more patient approach to both future interest rate hikes, and to the shrinking of the Fed balance sheet.  Both liquidity-enhancing measures were greeted warmly by investors, causing stocks and credit-sensitive bonds to rally.  Finally, ongoing trade negotiations between the U.S. and China show signs of progress—to the point that President Trump indicated he may extend the March 1st deadline for the trade talks, forestalling an additional round of punitive tariffs and giving investors hope for a de-escalation of the current trade dispute.

Macro-Economic Minute
Last week, the Federal Reserve Bank of New York released their quarterly report on U.S. household debt.  While aggregate debt increased only 0.2% from the prior quarter (to $13.54 trillion), this was the 18th consecutive quarterly increase, reaching a new high (in nominal terms).  Beneath the placid topline figure, there were some underlying trends worth noting: 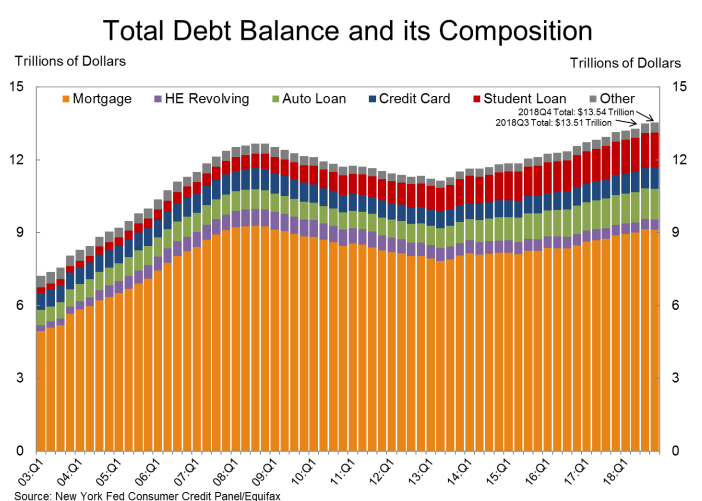 First, the composition of debt by type has shifted over time.  Student and auto loans are now a larger proportion of the total, while consolidated housing debt (particularly HELOC loans) are down from their peak.  Aggressive mortgage lending was a key factor in the 2008 financial crisis, and it’s clear that underwriters have tightened their standards since then.  Homeowners also prioritized deleveraging, particularly paying down revolving home loans (HELOC balances closed Q4 at a 14-year low).  More recently, the pace of mortgage origination has slowed (Q4 volumes were the lowest in 4 years).  Higher interest rates and the cumulative burden of other types of debt (student and auto loans) are crowding out home ownership for many young people.

Ironically, while mortgage lenders chastened in the wake of the housing bubble, auto lenders became more aggressive, extending credit at lower rates and for longer terms than had previously been available.  Favorable financing terms and an improving job market drove U.S. light vehicle sales to 7 consecutive years of volume growth between 2009-16.  But even though unit volume of auto sales peaked in 2016, the dollar value of auto loan originations continues to climb (2018 was the 9thconsecutive year of auto loan origination growth).  Summarizing the discrepancy in lending standards, the Fed report notes: “Only 10% of newly originated mortgages were to borrowers with credit scores under 660, compared to 31% of new auto loans in that category.”  In spite of a near-record period of economic expansion and historically low unemployment, the average car buyer today is more financially encumbered than ever.  Signs of financial distress in auto lending are most acute for younger borrowers (many of whom are burdened with a disproportionate share of student loan debt as well). 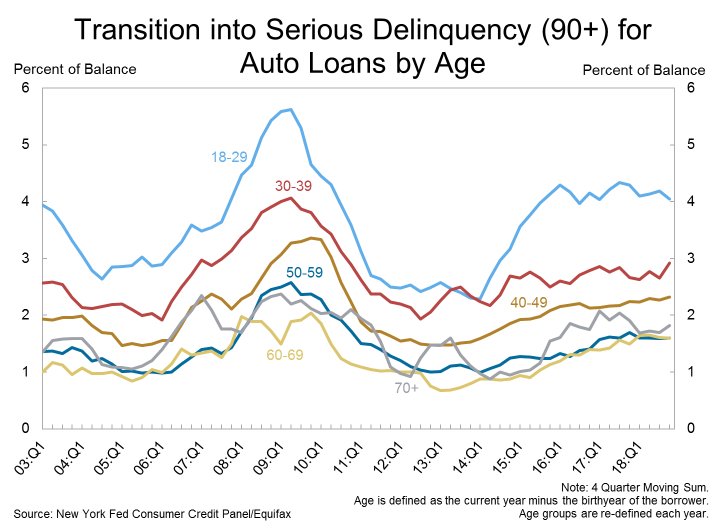 Student debt is another category which continues to grow, representing an increasing burden not just because of rising rates and compound interest, but also because it is one of the few types of debt which cannot be discharged as part of a personal bankruptcy.  Officially, the Fed estimates that 11.4% of outstanding student loans were more than 90 days delinquent at year-end: 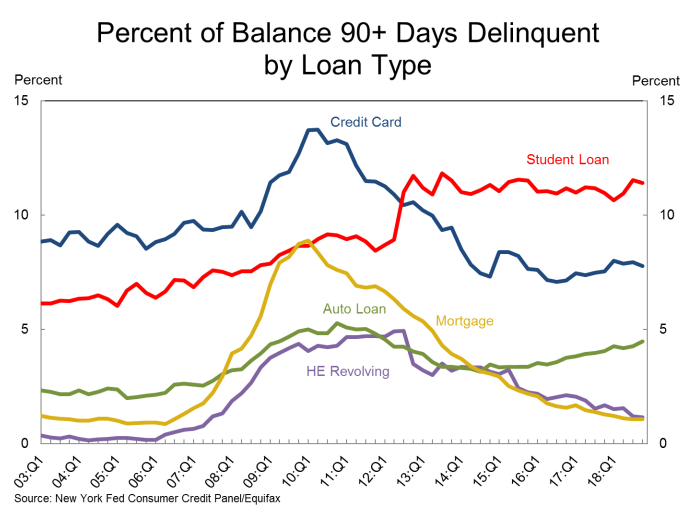 However, even this startlingly high delinquency rate understates the case.  That’s because the denominator in that figure includes all student loans, even those in deferment, grace periods, or in forbearance (roughly half of the total).  Therefore, the delinquency rate among borrowers currently in a repayment cycle is more than 22%.  A recent long form article from Buzzfeed News analyzes the student loan crisis through the window of policy choices made over the last half-century. The author’s rather despondent conclusion: “For many of us, student debt means delaying — if not entirely forgoing — home ownership, marriage, and parenthood. This new form of social stratification — between those who have student debt, and those who do not — will have ramifications for generations to come.”

Is there a silver lining in this debt story?  Well, maybe one.  For now, at least, the number of bankruptcies and foreclosures remains near 15-year lows: 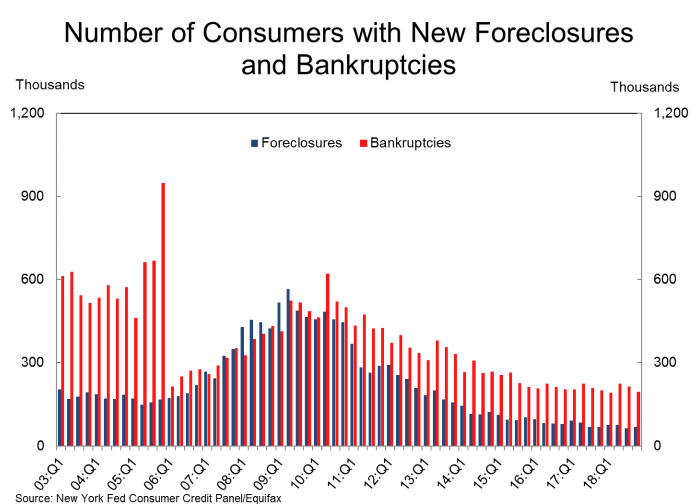