Berkshire Hathaway’s 2017 shareholder meeting was held on the first weekend in May.  The Wall Street Journal carried a helpful live-blog with notes from the lengthy Q&A session with Warren Buffett and Charlie Munger (the event’s main attraction).  One of Mr. Buffett’s more interesting points—particularly in light of current partisan debate on the subjects—concerned the relative impact of taxation versus health care costs for U.S. businesses.

Mr. Buffett contended that medical costs—many of which are born by employers in the U.S.—are the true “tapeworm of American economic competitiveness.”  While much is made of America’s statutory corporate tax rate being relatively higher than that of other developed countries, Buffett reminded the audience that as a percent of GDP, U.S. corporate taxes are now less than 2%, vs. approximately 4% in the 1960s.  Health costs, on the other hand, have risen from 5% to 17% of GDP over the last half-century.  Moreover, U.S. health expenditures even compare unfavorably with other developed countries (most of which have some form of universal health coverage). For perspective: Germany, Britain, and Japan all spend between 9-11% of GDP on health care.  Buffett’s point was two-fold: First, that American businesses which subsidize medical costs for their employees are at a competitive disadvantage versus foreign companies which do not shoulder the same burden.  Second, that the scale of these medical costs (and their accelerated growth rate) dwarfs the impact of differential tax jurisdictions on corporate profits.

Baumol’s Cost Disease
One person who would not have been surprised by the growing share of U.S. GDP devoted to health costs (indeed, he predicted it more than 30 years ago) was William Baumol, a celebrated economist who passed away at age 95 on May 4th.  Baumol is most famous for his theory of “Cost Disease” which explains how technological advances and rising productivity naturally lower costs for manufactured goods (i.e. televisions, smartphones), while increasing costs for labor-intensive services (i.e. health care, education).  The perverse logic of this theory is that industries that experience the largest growth in productivity (via automation, scale, etc.) drive up prevailing wages for the types of labor-intensive services which cannot easily incorporate the same productivity enhancements.  Baumol’s Cost Disease explains why televisions have become so cheap that the average American household can afford more than one, whereas pre-K childcare expenses now commonly consume more than 20% of the typical family’s annual household income.  Baumol’s theory also carries important implications for the growth rate of government spending (much of which is devoted to labor-intensive services such as healthcare, education, and law enforcement).  Finally, it helps explain why GDP growth rate tends to slow in more affluent societies, once their economies shift away from an emphasis on resource extraction or manufactured goods, and toward more labor-intensive service-sector employment.

Amazon at 20
This week marks the 20th anniversary of Amazon.com’s (AMZN) initial public offering.  During that time, the stock delivered a compound annual return of more than 35% per year, crushing the return of the broader market.  Today, Amazon has a market capitalization of more than $450 billion, despite generating only about $6 billion in cumulative profit (half of that in the last 2 years) during its entire 20 year period as a public company!  Unfortunately, very few investors likely benefitted from the full appreciation of the stock, for the simple reason that Amazon experienced a nauseating level of volatility over the last two decades, which would have discouraged even the most faithful investors.  In every calendar year since going public, the stock recorded a decline of at least 10%; drops of 30-40% were fairly typical.  For context, here is a chart comparing the largest intra-year declines for both AMZN (red) and the Dow Jones index (black): 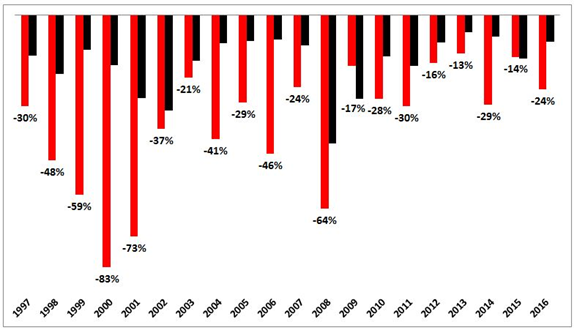 Thanks to hindsight bias, Amazon’s ascent to e-commerce dominance surely appears more obvious today than it ever did during the depths of the tech bubble collapse at the turn of the century.  Investors should not hold out hope of finding a similar lottery ticket anytime soon.

Additionally, it is difficult to ignore the fact that built-in expectations continue to be very high for Amazon going forward (the stock’s price-to-forward earnings ratio is 83x today). It is important to remember that a great company does not necessarily make a good investment if one overpays for the shares, while buying the unloved can provide surprisingly good results. A Seeking Alpha contributor recently illustrated (subscription required) this point by cherry-picking a surprising example:

“So, the quiz is, from November 30, 2012, to today, what stock did better? Was it Amazon.com or Best Buy (NYSE:BBY), that so evident electronics-retailing dinosaur? Of course, you know I wouldn’t be asking this if the answer wasn’t a surprise. The winner, friends, was Best Buy. Since November 30, 2012, Best Buy is up 293%. Amazon.com, which doesn’t pay dividends at all, is up 281%. On top of this, Best Buy paid an additional 41.4% in dividends since that date.”

The last time technology stocks trading at vertiginous valuation multiples experienced massive declines well in excess of the rest of the market was 17 years ago. A lot of today’s index investors were too young to remember. It is possible that this time is different, but we don’t see the upside of betting on it when we feel we can get satisfactory returns from low expectations and unloved investments without the potential risks.